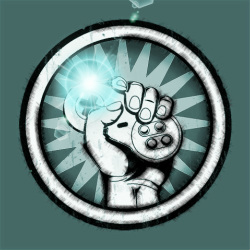 OCG, Competitive Fun
Oregon Competitive Gaming is about bringing the fun and excitement of pro-level competition in the field of electronic sports here to the state of Oregon.

The OCG had its humble beginnings in the golden years of the Super Smash Bros. Melee community, circa 2005, when the number of organized competitive Smash players in the state could be count on one hand. By 2008 the scene had grown from a handful of competitors to that of a scene hosting over 50 entrants in a single event.
Clearly there was something of interest going on here.

The entire gaming industry has grown a lot since those days, now the city of Eugene, where OCG started, has 3 arcades, several game publishers, and what seems like a game store on every city block downtown. With this growth comes a lot of gamers, and many of them are looking for a way to get to the next level of gaming challenges.
Having been hosting tournaments for several years, finding myself working at a game lounge (Shoryuken League), and still competing in events, it's only natural that what I've been doing also grows with the rest of the industry.

This website was created by a competitive and prominent Smash player veteran who played in pro-level tournaments and looks to promote the electronic sports scene in the state.